I decided to try something different, and I am not sure if anyone else has tried it. I wanted to take the best word processor that I could find (WordPerfect 6.0 for DOS) and make it compatible with ‘the cloud’. Well, I have found a way to make it work.

For the WordPerfect side of things, it is easy. Found a nice, working copy of 6.0 and installed it and use it via DosBOX. It is super stable, has an unobtrusive interface, and the best spell checker, even after 20 years.

Then, signed up for Dropbox and installed the client on all the computers that I use. Finally, I make sure DosBOX runs from the Dropbox folder. DOS is shockingly good on space, even with a bunch of games installed, and Windows 3.1, it only takes a small percentage of my Dropbox quota. So, now, when I fire up my WordPerfect for DOS, every thing I save to my “C:” drive is synchronized with my Dropbox storage. I can start a blog post on my netbook, and finish it on my home computer, right where I left off.

It is a little hokey, but it works really well and any changes I make, like install a new game, save my progress, etc. in a DOS application is automatically synchronized to all of my computers. Even using the small 2 gigs of space, that is more than enough for my needs. Anyone else doing something like this? Let me know in the comments below.

Returning to my roots.

I have been using computers a long time, and my biggest gripe is something as simple as a decent word processor. Frankly, trying to get something typed using a modern program like Word or Open or Libre office is an exercise is distraction. So, I have decided to return to my roots, and create in the program that I originally learned word processing on, Word Perfect for DOS. Using the DOSBox emulator, I was able to find an abondonware site that had copies of the original floppies. It runs like a dream. The great thing is that, in full screen mode, I am free from all the distractions. All I can see is this simple interface. It does have all the features (and in some cases more) than any word processor, including spell and grammar checker, WYSIWYG view, and a macros which still have not been matched. Heck, it even has reveal codes, which really allows you to modify every aspect of a document. 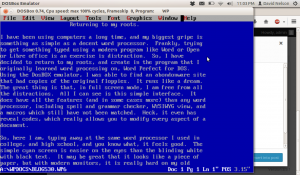 So, here I am, typing away at the same word processor I used in college, and high school, and you know what, it feels good. The simple cyan screen is easier on the eyes than the blinding white with black text. It may be great that it looks like a piece of paper, but with modern monitors, it is really hard on my old eyes. Also, with the limited resolution, the characters are just plain huge on the screen. I like to type without my glasses on, so this really is a blessing. I can see why some writers still use DOS based word processing. It is fast, great for touch typists and bad spellers. I don’t miss the red squiggly at all. I know you can turn it off, but it is just more natural this way.

Luckily, modern word processors running under Linux can easily read WordPerfect format files WordPerfect can also write and read Rich Text Format, which has be a standard for over 20 years. I really have to give this old workhorse one thing, it is stable and very fast. I am very impressed with how complete a program WordPerfect is, with a built in file manager, graphical mode, and a very impressive database of printers. I prefer the postscript pass through, just print to that printer and you can easily print to a modern printer. I am sure if I had an old computer I could find some printer it would work with.

So, if you need a fast, simple, but feature rich word processor, take a look at good, old WordPerfect 6.0 for DOS on abandonware sites. It works like a charm under DOSBox. Even though it is 20 years old, it gets the job done. You will get some odd stares when people see what you are using, but I like tools that work and stay out of my way. I grew up on, so why reinvent the wheel? I do think younger users will be surprised how well it works. I wrote this blog post using it.

Blogging on the go

Earlier this week I received an unexpected gift, an Adesso bluetooth keyboard.  I have really been wanting a full keyboard for my phone or Palm Pilot, so now I finally have something usable.

The keys are about 3/4 size, about the same as a mini laptop or netbook, with good tactile response.  The overall height is amazingly thin, around a quarter of an inch!  It charges via USB, but looks like it works via bluetooth only.  I will post a follow up later once I have used it a while and get to know what the battery life is like.  For now, it is a great little toy, and large enough to touch type on. 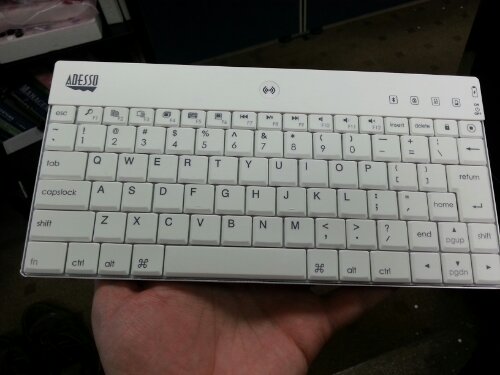 Okay is not Good Enough

Personally, I feel it is one of the least intuitive, least polished operating system GUI’s I have ever encountered. The transition from Modern UI to classic desktop is jarring and really unfinished. The controls are hodgepodge and inconstant. Hidden controls abound and make little logical sense. Heck, even shutting down the machine does not make sense. But, despite my personal views (and I have been using computers a long time), most professional reviewers miss one thing. Windows 8, at best, is poor on the desktop, pretty decent on tablets, and just okay, overall. That does not cut it in this day and age.

Personal computers with GUI’s have been around for over 25 years. Companies like Apple, Red Hat, Palm (dead), and Google and Organizations like X.org, KDE, and Ubuntu have all been developing desktop and mobile environments during most or all of this time. For the desktop, Apple’s OSX, Linux KDE, GNOME, LXDE, Cinnamon, and Unity are all elegant, easy to use designs. For portable devices, Apple’s iOs and Google’s Android, both derivatives of Palm OS, are perfectly matched to smaller screen environments. Microsoft’s own Windows XP and 7 are well matched for the desktop environment, functional, if not the most aesthetic implementations. There is a reason there is quite a dichotomy between the two. What works for one does not work as well for another. Microsoft tried to blend the two and ended up with bipolar acting GUI. To be honest, they didn’t blend them at all, you are just tossed back and forth between the two competing paradigms. In the end, you still have an okay experience.

On the desktop, why would you choose a hobbled system over OSX, Unity, or KDE? All of the alternatives are much better and you can find everything. On portable devices, you can argue Windows 8 is a decent choice, but is it really easier to use than the classic design of iOS and Android? Palm figured it out 15 years ago and it still works now. Okay is just not acceptable when very, very worthy and mature competitors are out there. I honestly don’t know what Microsoft was thinking when they released Windows 8 in its current form. This isn’t 1998, and you can’t release half baked software just because you are a monopoly. You are not a monopoly on portable devices or even a major player. Very risky, to the point of reducing Microsoft to another IBM. Stable, but a second or third class player behind Apple and Google.

I am very glad I made the switch to Linux many years ago do I don’t have to worry about the silly Windows shenanigans. For anyone who has made the upgrade to Windows 8, why did you do it, and was it worth it?

Finally, a simple word processor. I have found that over the years, I type less and less for my blog, and for enjoyment in general. Why is this? Well, for one, I really do think there are just too many distractions for doing some real writing. Even trying to type a watch review was a real chore. So, I went looking for something simpler, cleaner, and with less distractions. What I found was FocusWriter. It is available for Windows, Mac, and of course, Linux. What it is gives you is just what you see in the screen shot. A blank page to write on. You can import or create your own themes. Another neat feature is the fact you can set goals for yourself. Number of words, minutes of typing, etc. It is full screen, so no e-mail notifications, or instant messengers. I even have it set up to sound like an old typewriter, which this really reminds me of. When I was a kid, that is all you had to make professional looking documents. Computers and word-processors did not arrive on the scene until the mid 80’s. The program I learned to word process on was WordPerfect for DOS. It was a simple interface as well. No buttons, doodads , and almost distraction free.

This is WordPerfect for DOS: 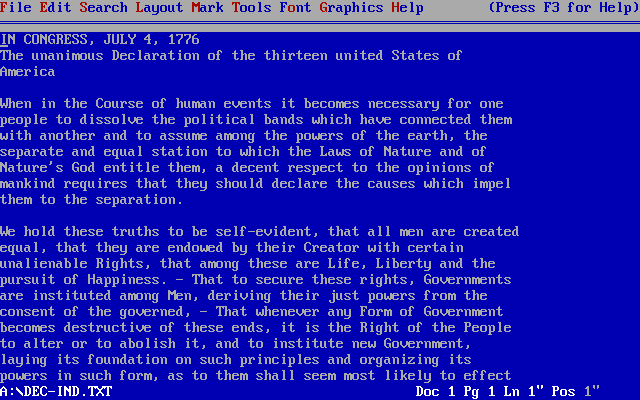 This is OpenOffice Writer 3.4: 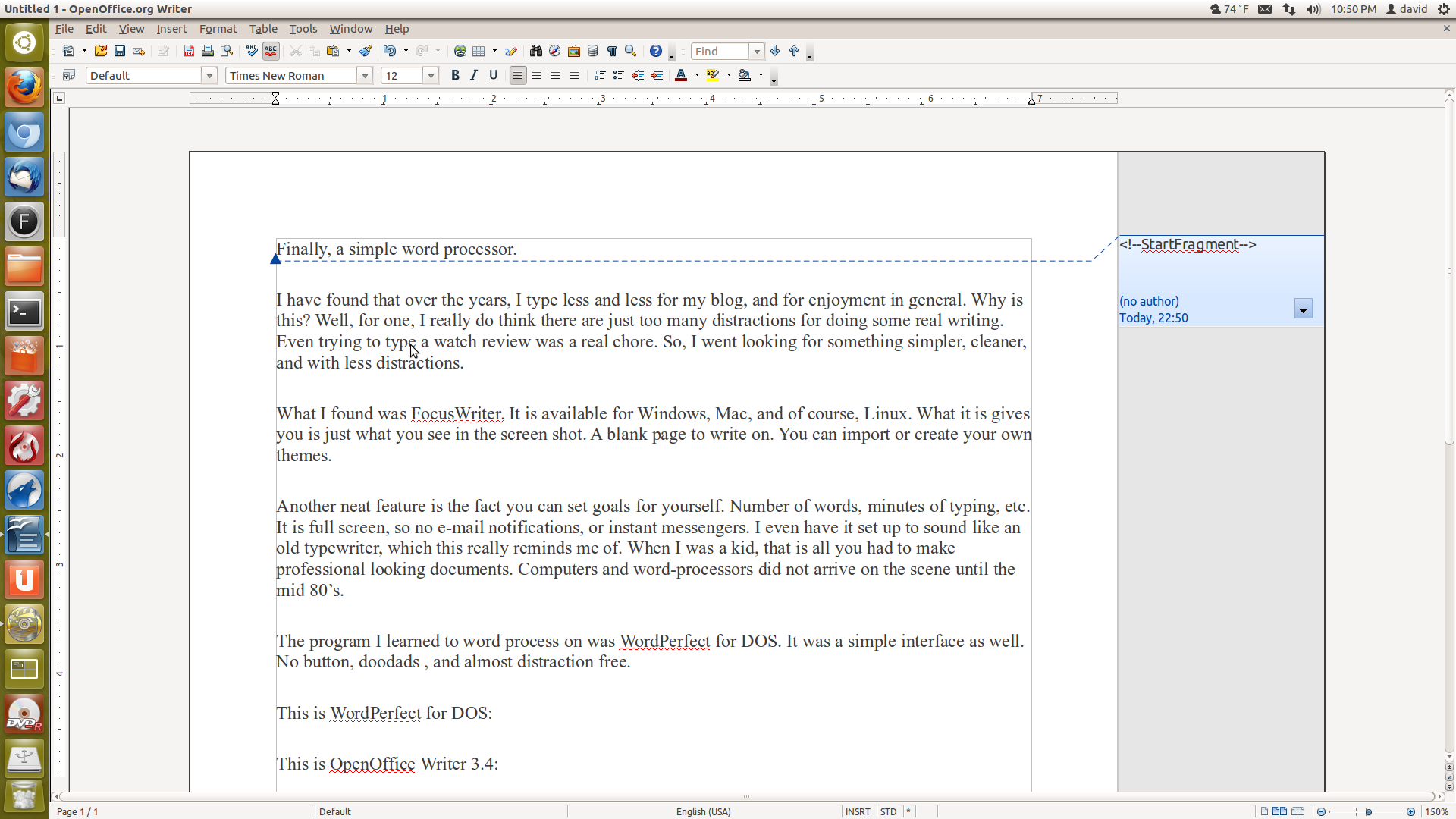 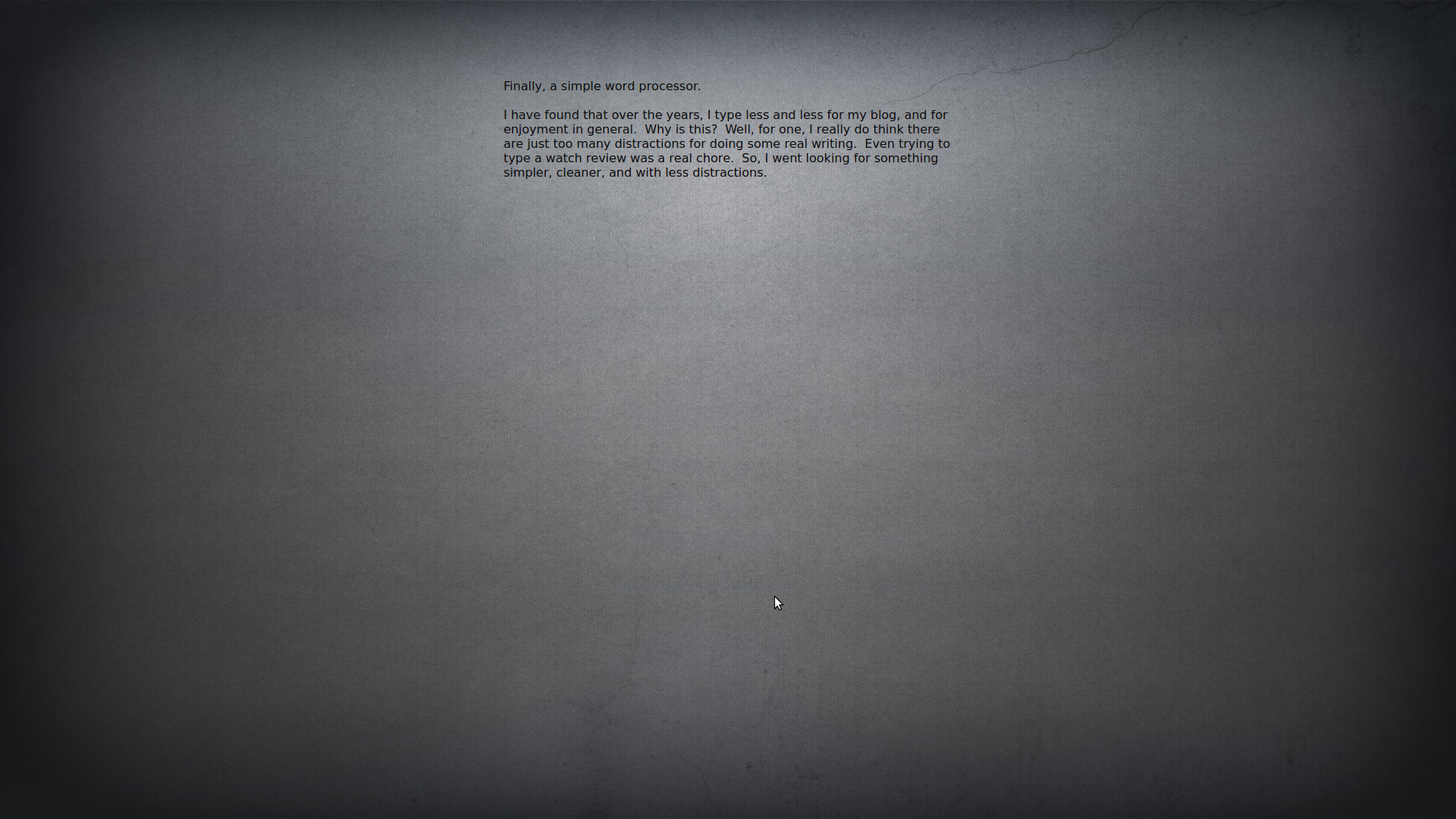 See the difference? For a little fun, I created a theme very reminiscent of WordPerfect for DOS. 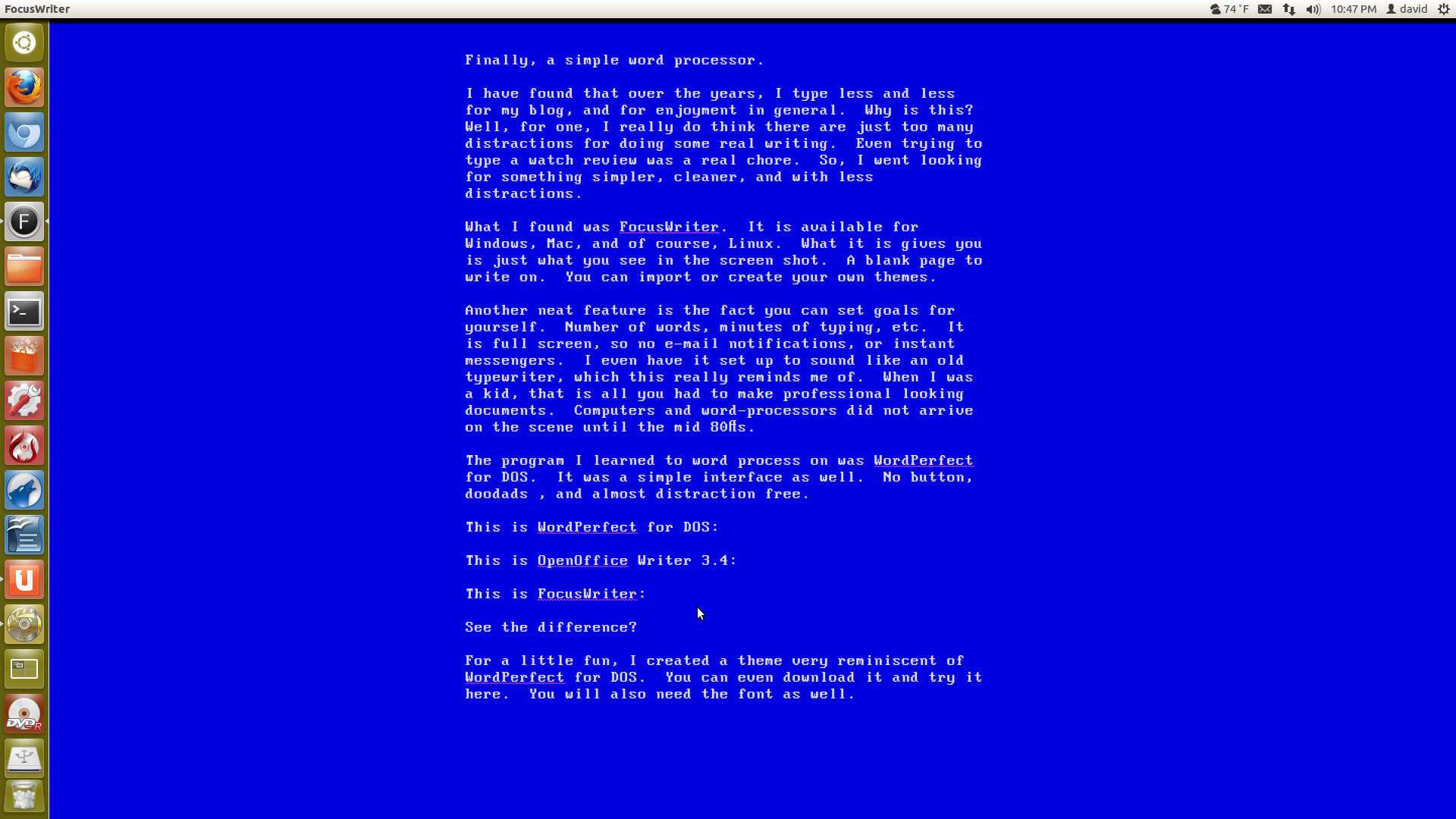 However, what I usually use is this: 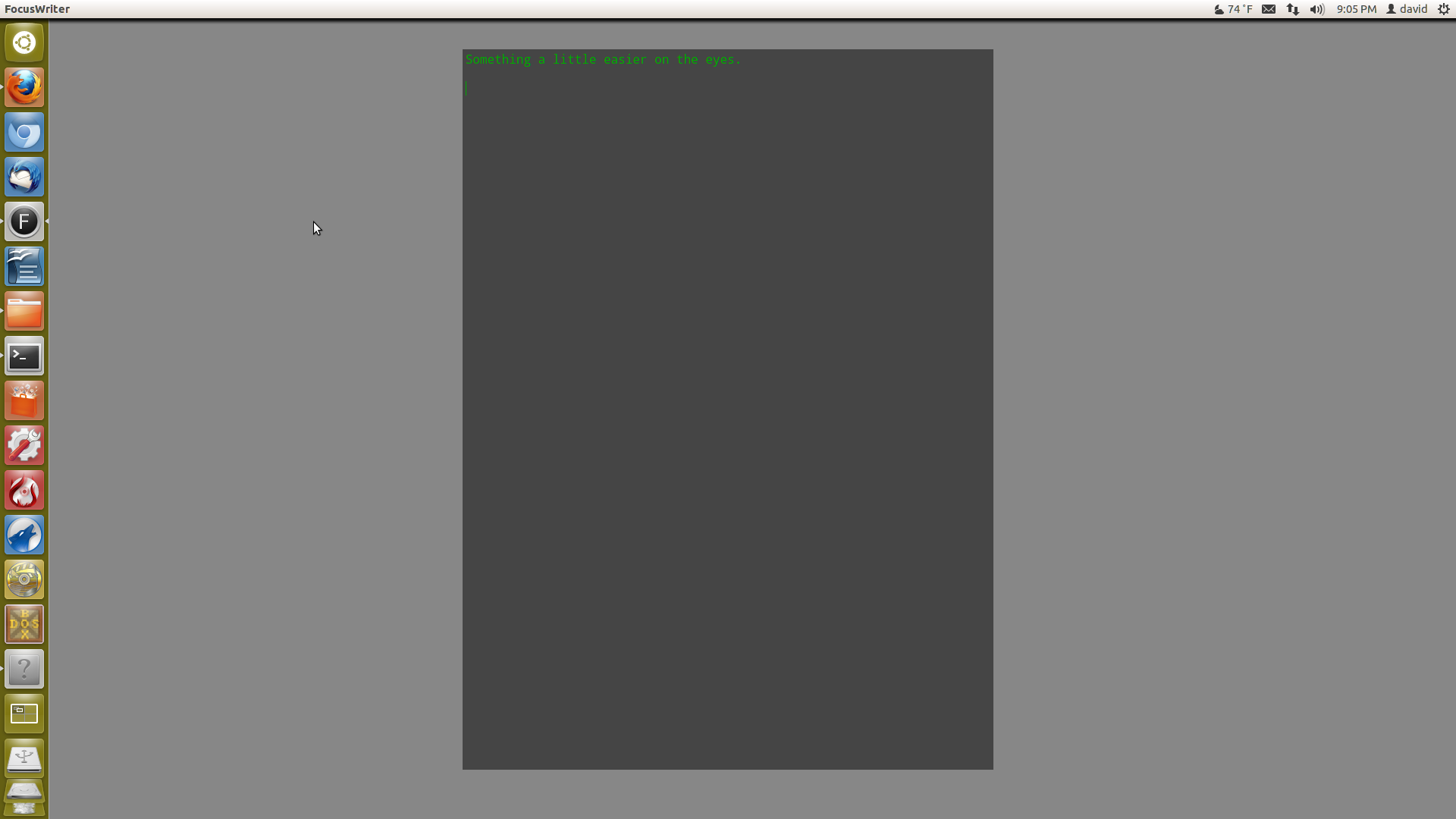 It is the classic green characters on a very dark screen, much easier on the eyes than a bright, wight screen, with dark letters.
Give it a try, you may like it.  It is even available for Windows and Mac.