What is Linux? It is an Open Souce operating system based on Unix. It is not a Unix clone, per se. It is a new implementation of the POSIX standard. It is a completely modern operating system with millions of users and developers world wide. It is a true multitasking operating system with a choice of many advanced file systems. It is also free, free as in Freedom and Free as in Free Beer. Linux can also be run on many hardware platforms, including x86 (PC’s),PPC (Mac G3,G4,G5), 68000, IBM Mainframes, Sparq, ARM, and many other processors. 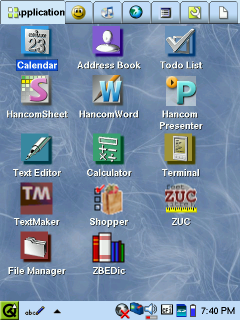 On a more personal note, it has been my exclusive operating system on my home computer for almost 5 years now. It brought fun back into computing for me. Windows is boring and buggy, and Mac is too expensive and the hardware is restrictive. In addition, my PDA is a Sharp Zaurus SL-6000L, which is also Linux based. I also owned (but sadly damaged) an Agenda VR-3, the world’s first Linux PDA.

For my home computer I use a AMD Athlon XP 2200 on a Soyo SY-K7V Dragon Plus motherboard, 512 DDR RAM, Nvidia GeForce4 MX460, and 1 60Gb, 1 40Gb and 1 120G hard drive. I built it myself, as store bought computers have generally poor quality components. I run Mandriva 2005LE, but have also installed RedHat, Suse, Slackware and Debian as well over the years to try all different flavors. Mandrake/Mand riva was the first Linux Distribution I tried, and it is still my favorite, although I really like the package management of Debian(but not the…maturity of many the packages included). My computer has never had MS Windows installed.

Some Useful Things:
Zaurus Applications and Notes
Tutorial How to Rip and Burn a DVD9 to a DVD5. It is a work in progress, so sorry about any errors.