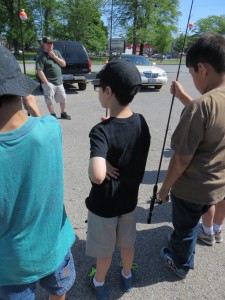 Yesterday I did something I have not done in ages, went fishing. Through Glenn’s school, they had a Father and Son fishing outing at Marquette park, in Chicago. It was nice, you did not have to bring anything, they supplied the poles, bait, and, group fishing license, and instructions. I had to warn Glenn ahead of time, it is called fishing, not catching for a reason. The lake is an odd one, making a circle around an island, and kind of unexpected in the middle of city.

Luckily, the lake is less than four miles from our house, so you could not ask for a quicker lake to get to. We arrived on time and there were a fair amount of kids there, I would say about thirty or so, with dads, so there were over fifty people there fishing. You could tell most of them had never fished or cast a rod and reel before. The poles were simple spin casters, what I learned on as a kid as well. 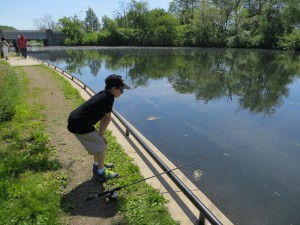 As was expected, there was not much to catch out there. With all the direct sun, all that was caught in two hours was just a couple of catfish called bullheads. As you can see, the are kind of an ugly looking bugger. The dad who caught him admitted it was kind of a cheat, he saw the fish in the shallows and lured him out. A lot of the kids, including Glenn were able to get a good look. 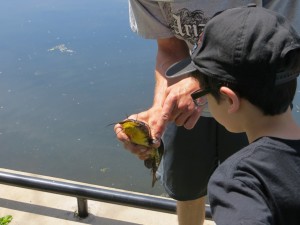 In the end, the kids got a little antsy after almost two hours in the sun. There was a quick raffle at the end, we didn’t win anything, but it was such a nice day to spend outside. No one made money off of the trip, the small amount we paid went to getting the raffle prizes and nothing more. The area was very nice, and I never knew there was a lake and a golf course, right in the middle of an urban, residential neighborhood. I am almost tempted to get a reel for Glenn to practice with, but I can just see the line getting caught in every tree in a 100 foot radius.

Had a great day today, went to Brookfield Zoo, for you non Chicagoans, it is a zoo in the western suburbs of Chicago.  Been a surprisingly cool summer so far, so it made for a pleasant day at the zoo.

Saw the Dinosaurs alive exhibit, some life size dinosaurs we on display: 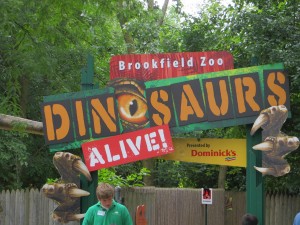 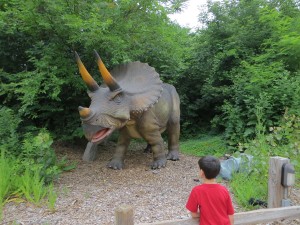 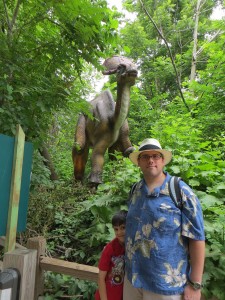 Also, there were feathered dinos there as well. 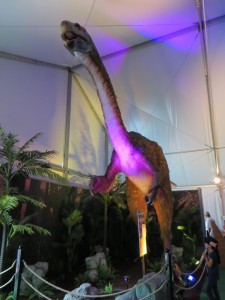 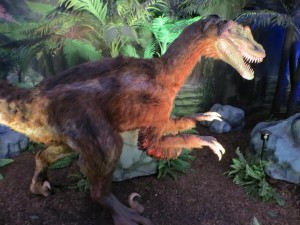 What I found interesting, even looking a little chicken like, they are still dangerous looking creature. 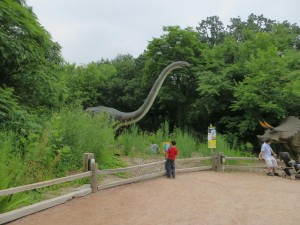 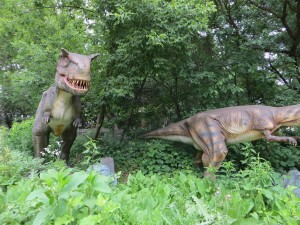 I really liked how they were in a forest setting, with real plants.  There were control panels for some of the dinosaurs to make them breathe, roar, swing their tails and move a bit. 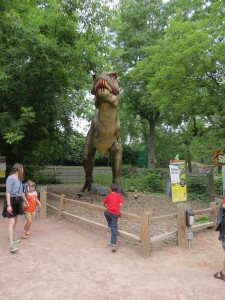 At the end, there was a full sized T-Rex.  That alone made the entry fee worth it.  There were also real fossils and reproductions of fossils in the air conditioned tent.   Later in evening we went to see fireworks, which I learned a long time ago, to never try to take photos of.

From the Chicago Sun Times, this is my Father-in-law: 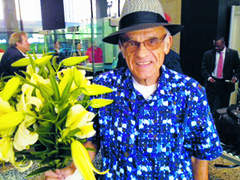 If ever there was a guy who has seen it all when it comes to Chicago’s most infamous politicos, mobsters and power players, Chris Passias is your man.

A retired Chicago Police officer, Passias has worked the last dozen years as a security officer in the Dirksen Federal Building.

On Tuesday, dressed in a natty summer fedora and blue-patterned shirt, he bid farewell to court personnel and news crews standing by the lobby metal detectors through which he once monitored the felonious likes of Rod Blagojevich, Joey “The Clown” Lombardo and Lord Conrad Black.

Well, I must say this Thanksgiving is a lot better than last year and I actually have a lot to be thankful for.

I am very glad that the second half of this year is better than the first half.  It was the first time I have ever been admitted to a hospital.  I hope the remainder of the year is uneventful.

Posted by admin on November 24, 2011 in Family, General Comments

It has been a little more than two months since I collapsed due to chronic pulmonary embolisms.  Snce then, I feel a whole lot better.  It really puts everything in your life in perspective.  If you don’t have your health, nothing else really matters.  The ability to breath again has improved my daily life.  I can smell again.  I can walk up stairs without loosing my breath.  I can walk a 5K at lunch time, and all I feel afterwards is a little sweaty.  In addition, my hands are still steady, making watch repairs (a hobby of mine) a whole lot easier.  All I can say is, if you have shaky hands, fatigue, and a hard spot on your leg, go to an ER, now.

In addition to getting my lungs fixed and preventing a re-occurrence, I am also loosing weight.  If you have ever tried, the hardest part is the mental aspect.  Adjusting what you think is a proper portion.  Knowing when you are full and not really hungry anymore.  Dealing with the occasional hunger.  Don’t be fooled.  If you are dieting to loose weight, you will get hungry.  You also need to get in the mental habit of exercising a lot more.  They say, when it comes to diet and exercise, emphasize the exercise.  It helps improve your health and boost your resting metabolism (due to more muscle mass).  It is a hard road ahead, but at least it is better than collapsing for no apparent reason.  With the new lungs, exercise is so much easier.

Another thing I realized, I really miss updating my website.  I am not promising daily updates, but I will at least try to keep the site more up to date with opinions and what is going on in the world of Dave.

Posted by admin on August 30, 2011 in Family, General Comments